Madrid, February 11, 2014. AES and AIMCSE sign collaboration agreement.
AES has signed a collaboration agreement with AIMCSE today, thus becoming
the first Association of Security Companies that reaches an agreement with the Association
International of Members of Security and Emergency Bodies. The president of AES and the vice president of AIMCSE were responsible for signing the
document during the act to which several members of the Boards also attended
Directives of both associations. The agreement will develop actions that may favor the interests of companies in the sector
of the security and needs of the professionals of this sector looking for a dialogue
constructive that favors the development of business for AES associates and enhance the
growth, training, specialization and other benefits for the members of bodies of
security and emergencies. Within the framework of joint work, actions for training, research and
development, promotion of employment and other activities that will be communicated in a timely manner.
AES is the Spanish Association of Security Companies, founded in 1981, which encompasses
companies dedicated to the physical security industry and electronic video surveillance and
whose value proposition is «invigorating the private security industry». AIMCSE is the International Association of Members of Security and Emergency Bodies,
an entity that promotes activities for professionals in emergencies and security
international level. The president of AES and the vice president of AIMCSE at the time of signing. 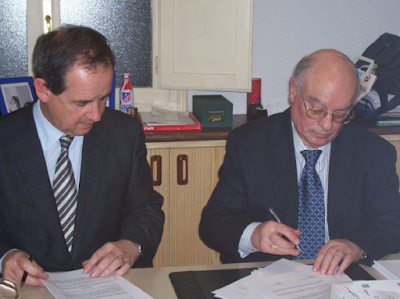